The Independent Voters Guide to the Galaxy

Over the past few weeks, I've been thinking about CSM election strategy, and about how to best balance the influence of nullsec blocs and the rest of the EVE population.

The results can be found in my Independent Voters Guide to the CSM Elections. Enjoy!
Posted by MadOverlord at 10:14 PM No comments:

An Offer He Can't Refuse

On my Lost in EVE debate I made a major campaign promise! Here's a poster that gives the details... 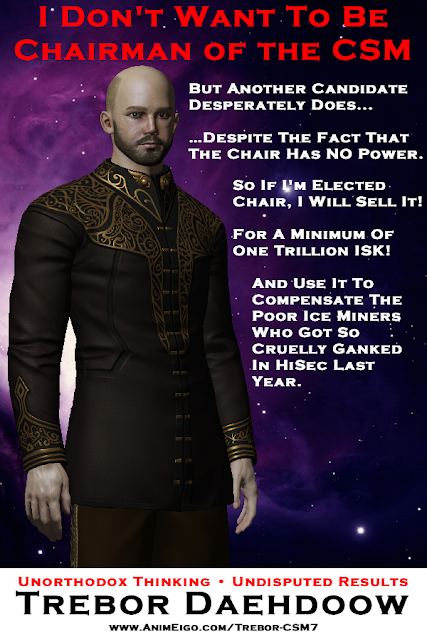 Just in case it isn't clear, I'm making this offer to point out the absurdity of The Mittani's central premise, that he needs to be chairman in order for the CSM to be effective. This is nonsense; the chairmanship has no real power. The Mittani is an effective member of the CSM because he works hard and is a persuasive advocate, not because he's chairman.
Posted by MadOverlord at 9:29 AM 2 comments:

My skill-training plan is very specialized... :) 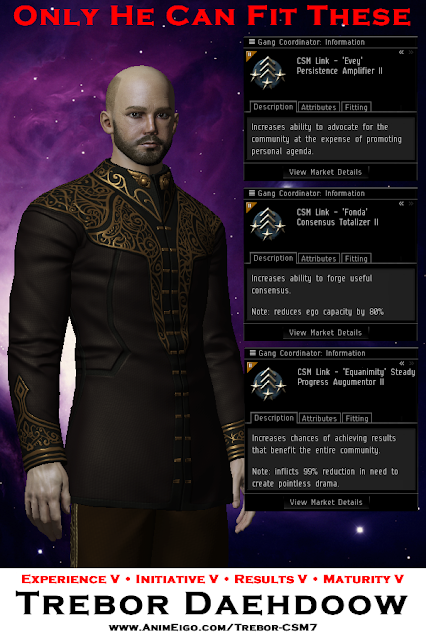 Posted by MadOverlord at 4:26 PM 4 comments:


Every year, I go to the Hacker's Conference, a get-together of "old-school" hackers and makers. Associated with the conference is an active mailing list that's been around for decades. Recently, there has been an active discussion concerning bosses like Steve Jobs, and why people work for them (and put up with them).

A post came across the list from Laura Creighton that I thought was very interesting and perceptive. While it's not directly related to EVE, it does have some insights that do apply to the game, CSM and CCP, and which I think are very worth sharing.

So, with Laura's kind permission, here's what she wrote:


Interestingly, every study I have seen where people have studied the effects of 'rewarding people for doing well' has proven, conclusively, that people, collectively perform much worse if they are rewarded for doing well.

There are 2 caveats to this. The first is that, in selecting a job, people really do often choose the one that pays best, has the most perks, etc. So yes, paying your employees well does tend to attract the most people, which does give you a better shot at 'selecting the best' from the more that show up. And some very good people will not show up unless you pay them well -- they have taken jobs somewhere else where they were. Also, some jobs, which are of the pure drudgery sort, can be set up so that people are so desperate for immediate gratification that they will work for the incentive.

Otherwise, the immediate effect of rewarding people for doing well is to crush performance. And what is worse, it never comes back. It turns out that most people do their job well because they like doing their job well. But if you start rewarding them for that, they stop doing things in order to nurture their own creativity, but instead start doing things that they think of as being 'worth the reward'. And most top performers perform better, work harder, and are more creative when doing things for their own sake than in order to get a reward. Their productivity decreases.

And down among the bottom performers, things are even worse. Suddenly the only reason to do the job is perceived to get rewards which will never come to these people. They completely lose motivation, and slack off totally. Thus the whole thing is a catastrophe.

We are getting better at understanding why this is so. The parts of the brain that the creative person uses when being creative and productive are different parts of the brain that are used when rewards are being calculated. And, of course, the whole business of giving rewards has, in addition to the message 'you did well' but the message 'I am an authority who gets to judge you'. Primates have lots of brain circuitry devoted to understanding one's ranking in a group, compared to the alpha-beings who get to judge you.

Current neuroscience says that you cannot use the creative part and the social-status part at the same time, and you can max out on using the greedy calculator in your brain to the detriment of your creativity. This is why when you are really, really being creative you often feel entirely outside of yourself. Your social insecurities, and your greed just drop right off. For many people -- but not this list -- this never happens.

Thus people who have never had a creative thought in their whole lives think only in terms of social rewards, and don't know they are killing creativity by doing this.

See Alfie Kohn's Punished by Rewards to learn more about this fascinating stuff. The book is quite old, and we have known about this for quite some time, but there are links to researchers who have more recent research. It always says the same thing.

So, what I think is significant about Jobs isn't about reward. It might be about punishment -- I haven't seen that studied as much. The papers I see seem to indicate that it works in environments where you desire caution, but it is bad for creativity as well, so I tend to think that this wasn't the important bit either.

What I think was significant was that, when things are uncertain, a huge number of people really want to follow somebody who appears to be wholely convinced of their own vision, and who is decisive, and who isn't uncertain at all. People are happier following somebody who is confident, though wrong than somebody who is uncertain, though posessing a greater critical awareness, which contributes to their uncertainty.

This may have relevance to the Kruger & Dunning study Unskilled and Unaware of it -- a very good read.

People who are unaware of how unskilled they are at something often bite off more than they can chew. Most, of course, fail miserarbly. But the odd one succeeds, often by using a technique that would not occur to those with greater familiarity with the problem. Perhaps leadership works this way as well. Some leaders may have been made great by the caliber of the people who chose to follow them, precisely because they were confident where a wiser person would have doubts.

I'm sure everyone, after reading this, can think of ways in which it applies to their EVE experience.

Posted by MadOverlord at 8:44 AM 2 comments:

I succumb to the latest meme 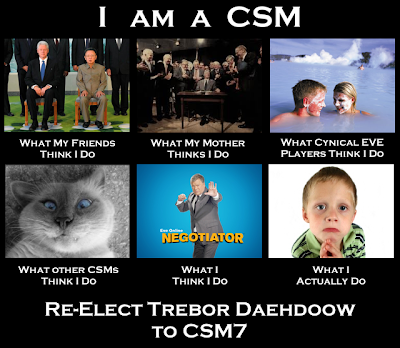 Coming This Summer To A Screen Near You!


CCP Soundwave has gone public (in a podcast; Jester has a good summary of the contents, some of which is quoted below) with broad details of what CCP is working on for the Summer 2012 release, which means I'm free to make some observations.

"The summer patch is going to focus on 'fundamentals' and 'old systems that are hampering us.'"

This is a natural progression from Crucible. With Crucible, there was no time for long-term planning, so they concentrated on point-fixes. With the luxury of time, they're thinking longer term.

"The war-dec system is going to be redone, particularly as it applies to Empire war-decs."

This is part of a significant redesign and rewrite of Crimewatch, the code that handles all the agression timers, Concord and Police response, and so on. I was very pleased to hear in December that CCP is tackling some of their oldest legacy code -- it bodes well for a stab at iterating on POS's, which Soundwave touches on at one point. Yes, the Dead Horse may rise from the grave!

One thing I do hope that comes out of this rewrite is more emphasis on making it easier for people who want to fight to find fights, while at the same time making it harder for people to abuse war-decs to grief players who simply have no interest in PvP. I made this point at the summit, and quite frankly, I thought that some of the mechanics suggested at the summit would be invitations to organized extortion.

"Faction Warfare is going to receive a massive rework."

This is the big one, and I couldn't be happier. This is exactly the kind of iteration that CSM has been pushing for, and FW is the perfect place to start, because (as I have pointed out several times) CCP can try something innovative here -- who knows, perhaps an capture mechanic based on actually occupying and using the space -- and apply the lessons learned to fixing other problem areas in the game, such as nullsec sov.

CSM does not yet know what CCP has planned for FW 2.0, but it will likely be something that gets a lot of attention during the final months of CSM6.

"CCP is going to build in more tools for alliances to 'make money off their members.' Then they're going to get rid of the massive 'own this moon and you're set forever' system."

Both excellent ideas. I am a big proponent of "you get sov by using space", as opposed to "you get sov in order to use space", and these are both steps in the right direction.

I look forward to Soundwave clarifying exactly what "social means" he means, but again, this seems like a step in the right direction.

"Soundwave mentions that he'd like POSs in EVE to be more like 'houses in Skyrim': a place that you live and that's yours and set up how you like and that every EVE player should want one of."

In other words, Dead Horse Dead Icelandic Pony. I'd very much like this to be the centerpiece of the Winter 2012 Expansion, if possible coupled with a rewrite of Industrial mechanics. I'm a big fan of industrial systems where you just say what you want done, and the system figures out how to do it -- PI mechanics is a first step in that direction, although you still have to manually hook up the wires.

All in all, these tidbits are great news. As long as players and the CSM keeps the pressure on, I think we're going to see interesting stuff on SiSi in the coming months.

Posted by MadOverlord at 7:56 AM 6 comments: