A few posts back, I mentioned that CCP had asked the CSM for election banner ideas. Well, here's another one of mine that they decided to run with...

Obligatory Vote-For-Trebor Link
Posted by MadOverlord at 10:46 AM No comments: 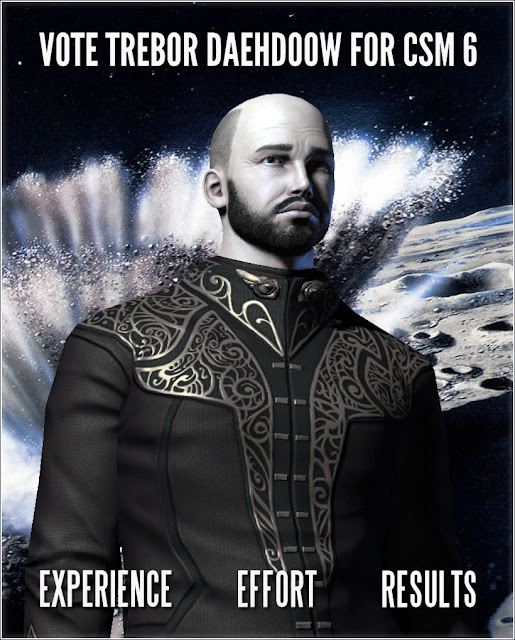 Obligatory Vote-For-Trebor Link
Posted by MadOverlord at 4:57 PM No comments:

I'm apparently much more distinguished than I thought...

Those horrible rumors about Seleene and Trebor are absolutely false...

Despite what you might think when you see this poster,
we're not an old married couple.
We're just good friends. Honest!

Surfing the Sea of The Mittani's Mud

Over the past few days, I've been the target of a big smear campaign by The Mittani and his goons.

It's the usual bullshit. Quote mining out of context, character assassination, ad hominem attacks, the big lie -- all the classic techniques. They even started a campaign to have my wikipedia page deleted (currently failing horribly) and twice vandalized the page.

The Mittani is running on a platform that only he and his friends can make the CSM effective, so it's vitally important to discredit anyone who can put the lie to his fundamental argument. The truth is that CSM 5 has been extraordinarily effective, and I was one of the biggest reasons why.

CSM Chair Mynxee says my performance "should serve as the Gold Standard for CSM delegate performance." Even Vuk Lau, whom I had numerous disagreements with on CSM 5, agrees that I was "[the] most dedicated delegate of CSM 5 and CSM 6 will be blessed with him on board." And so do a great many players, judging from their supportive mails, PM's and forum posts.

And that is exactly why The Mittani and his buddies are running for CSM. He's realized that it is actually very, very effective at influencing CCP, and he wants to try to use it as a vehicle to advance his own petty in-game interests, at the expense of the vast majority of the players of EVE.

You would think that nobody would trust the word of EVE's most famous spymaster and disinformation artist, but as any student of history will tell you, if you repeat a lie often enough, people will start to believe it. And The Mittani has lots of weak-minded parrots at his beck and call.

But you can put a stop to this. You can teach The Mittani a lesson in civility.

I've spent 2-3 hours a day working to build the CSM over the last 10 months. Now I'm asking you to spend a few minutes of your time to make sure all that work doesn't go to waste.

The choice you make right now, at this very moment, could decide whether CSM 6 continues to build on the hard work of CSM 5, or becomes the forum for The Mittani's attempt to twist EVE to his own advantage.

If you make the right decision, then this YouTube clip should give you an idea of what you'll do to The Mittani's plans.

My most appreciative thanks, in advance,

PS: If you want to drop everything and vote for me right now, just click here.
Hi,
I just wanted to drop you a note to let you know about something really disturbing that's going on in the CSM elections.
The Mittani is so scared that Trebor Daehdoow is going to get re-elected that he's unleashed a massive troll and smear campaign against him. It's classic goon bullshit.
See: http://www.eveonline.com/ingameboard.asp?a=topic&threadID=1472157&page=1#4
But as Trebor points out in "Trebor's Complete Guide to Mud", he is not the real target of this campaign. The real victims are a bunch of good candidates who deserve to be on the CSM - guys like Seleene, Ripard Teg, Meissa Anunthiel, Jonathon Silence, and Roc Weiler.
See: http://www.eveonline.com/ingameboard.asp?a=topic&threadID=1479234
Please do me the favor of checking out the threads, and consider voting for Trebor Daehdoow, or one of the guys listed above. And pass this message on to your friends.
The Mittani claims that he, and only he, can make the CSM effective. But the truth is, the CSM is very effective, and that's the reason The Mittani is running. Don't buy the lie!
Thanks a lot!


You can vote for Trebor by clicking this link: http://www.eveonline.com/council/voting/Vote.asp?c=358
Posted by MadOverlord at 9:13 AM 9 comments:

The Polls are Open! Vote Early, and Often!

The polls are open in the CSM election, so please take the time to vote. While obviously I'd like you to vote for me, the most important thing is that you express your opinion. Remember, if you don't vote, don't bitch. Here's a nice easy-to-click voting button you can use:

(note: you may be asked to log in when you get to eveonline.com;
after that you'll go to my voting page)
On a side note, the CSM is not all hard work. CCP Diagoras foolishly asked the CSM to come up with slogans for CSM-related election banners. Here is one of mine that just started running.

Posted by MadOverlord at 9:37 AM No comments:

Several people who apparently think I should be re-elected have been exercising their rights to free speech in poster form.  Enjoy!  Perhaps I should offer a prize for the best poster?